Day 632: Today, I’m talking about race. Sorry if that makes you uncomfortable, but that’s just what I do around here.

Here is my disclaimer: I am about to address the INCLUSION of People of Color. NOT, I REPEAT, NOT the exclusion of white people. INCLUSION! 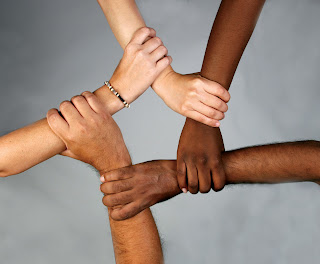 So you might be wondering why I’m talking about race. This isn’t about Trayvon Martin, though I’ll get back to him. I’ve been wanting to talk about this for a while now, but yesterday I was pushed to it. I was in a chat on twitter and there was talk about writing characters of color/non-white characters. I did not start this discussion. And the general response was “I, as an author, do not write characters of color because I am afraid of presenting a racial stereotypes that people will find offensive.” This is not the first time I have heard this response.

Okay. Valid argument. No one wants to offend people, most of the time. And yes there are portrayal of people of color out there, but I am terrified to think that Tyler Perry speaks for me and it makes me sick to my stomach to think that Kathryn Stockett speaks for my grandmothers. So what are we left with if not the stereotypes? Omission. Here’s the problem with complete omission, when you leave characters of color out (the same can be said of gay and lesbian characters, characters of varying gender identities, etc.), they no longer exist in your world. When they don’t exist in your world, they don’t exist in the reader’s world. This is dangerous, especially for people who are only exposed to diversity through books, film and television. Just as dangerous as the stereotypes and in cases, more harmful.

Now when the reader sees themselves on the page, there is an instant connection to that character. Other people see me. Other people acknowledge that I exist, that I have thoughts and feelings and value. I loved She’s Come Undone by Wally Lamb because he wrote about an overweight girl in an honest, real way. BTW Wally Lamb has never been an overweight girl. He took the time to write how difficult it is to be overweight and how one may find themselves overweight in the first place. He nailed it.

The current standard is the brunette, doe eyed, young white female between the ages of 15 and 26 who seems to be the focus of EVERY book, movie and television show. I have nothing against this, but I am against every other girl being left out. I am against the only portrayal of African American youth in the last five years being the drug dealing kids of The Wire, the kind of portrayal that leads to deaths like Trayvon’s. I’m against Amber Riley having to play the teenage version of the fat, sassy black woman.

I was raised in a very warm, two parent home in Southern New Hampshire. Both of my parents are well educated, community minded people. My father, in particular raised me, not to be color blind, but to be kind and respectful of all people. As a kid I watched as he spoke with strangers and neighbors, and you know what, my father treated everyone the same. Teenagers, children, the elderly, his peers, even people who annoyed the hell out of him (I know his “I’m pissed off” face though others don’t) with the same respect. A lot, and I mean A LOT, of people love my father. The things I’ve heard said about him would bring most people to movie of the week tears. As a father to four black children in a white town he NEVER made race an issue. He taught us to behave as any parent should. He taught us the importance of studying hard and in a timely fashion, even though this message didn’t really sink in for me until I hit college. He took us to James Taylor concerts.

Here’s the thing, my father could have made race an issue. He grew up during the 50′s and 60′s. He lived through segregation. His parents and his grandmother who had a hand in raising him, lived through worse. But not once did I ever see any sort of angry black man chip on my father’s shoulder. He’s the same way to this day and I think, even better because age has just made him wiser and even more understanding of the world around him and yes, people continue to love him.

This was my spring board. When I hit elementary school, I went out into the world with this mentality: treat people the same. And I did. I bounced between different social groups right up to college and in that time, I dealt with racism from another kid exactly once. He dropped the N bomb and I let him know about himself, but that’s another story. I had a friend ask me some silly things about my hair, but it was innocent ignorance and I love her dearly.

I did, however, face racism from adults. I’ve had adults and, yes they were white, pull my hair as they asked me what it felt like. And yes this is racist. Treating little black girl the way you would treat dog is racist. I have had a girl tell me her mother didn’t think she should use our toilet because she would get AIDS. I’ll let you marinate on that for a moment. There were countless other instances that don’t need to be rehashed, but it was the adults in my life who exhibited the most ignorant, racist behavior. As I’ve gotten older, I’ve seen that racism is taught. It trickles down. I have seen it with my own eyes. How do we change this? We work from the bottom up. Now I’m not stupid enough to think that racism will ever disappear completely. It’s a global issue. People thrive of superiority and separation. But things can be made better and we start with the images we show our children.

When I was a kid I was most often compared to Missy Elliot. She was big and black. I was big and black. Beyond that, I have no clue if I have anything in common with Missy Elliot. I don’t know her, but at the time she was the only woman of color my friends could identify with and that’s a shame, but the entertainment community wasn’t thinking about me. They didn’t think I needed to see my image reflected in the media. I’m sure Missy Elliot wasn’t thinking about me either. These days the defaults are Oprah and Beyonce, again two woman that I’m not sure I share all that much in common with. I would kill to be compared to Octavia Butler. Oh man. But let me get back to my main point.

I gave up expecting to see myself anywhere after The Cosby Show went off the air and that sucks. It sucks that I’m a little shocked to see an Asian/White couple in a VW commercial. It sucks that I know that commercial is not being played in parts of the country.

The main praise I have received for Better Off Red is that I have included a diverse cast of characters. As it stands, I have women who are Japanese, African-American, Puerto Rican, Bajan, Native American, Russian, British, and Scots-Mexican. I touch on their history, but I’m writing about vampires. I need to focus on them being vampires and what issues that presents. Moving forward, that I see, all of my romances will feature interracial couples. I had another author ask, with some shock (and a little disgust maybe, she seemed to be against this idea, like I was trying too hard) why I would do this. I think she was wondering why I wouldn’t just write black couple or white couples. Why? Because people ask me all the time to recommend romances with people of color or for romances with mixed couples. All the time. Because I don’t live in an all white world. I live in Koreatown. If anything I should be writing about Korean couples. I’m not in an all black relationship. Because my best friends here in LA are Latina and Korean. When we walk into a room, INSTANT DIVERSITY! Why? Because I am afrai
d to leave it up to other authors to do it for me.When people take to screen and page the default is white. Tell me I’m wrong and I will laugh in your face.

When you say, and by you I mean the fifty or so writers I have heard say this since I’ve entered the game, when you say you are afraid to write stereotypes, you are saying that stereotypes would be your approach. I have stopped reading authors who latch on to the stereotypes. Native Americans being the most recent and horrifying portrayal. Here’s the thing about stereotypes in fiction, no matter how true you feel they are in real life, they actually don’t translate well to the page or the screen at all. If your main characters is a dumb blonde with no personality, your reader will not be interested. That’s a stereotype right? But why the hell would you write it? Exactly. Here’s a tip: don’t write them. If you want to write about an Asian character, give them an interesting journey. If you base the journey around a math competition, well… If you are writing about D