I love having guests especially when it means I don’t have to vaccuum or do the dishes. Ruth Diaz is stopping by today to talk about sex and her new novella The Superheroes Union: Dynama. EVERYONE BE NICE!

The Elephant in the Room: Sex in Writing and Cultural Baggage 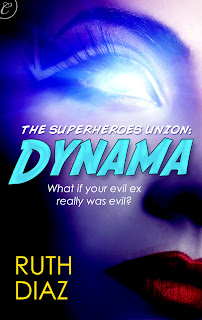 Sex is one of those subjects you don’t discuss between generations, let alone in a coed environment. Probably not even in an all-female environment, not without blushing and speaking from behind a concealing a hand, or perhaps in the context of humor. It wasn’t that she wanted to restrict what I might write. But she never wanted to be in the position of having to explain it to our extended family.

Sex is a part of life. Most of us admit it, even in my small-town, Midwestern, extended family. As a matter of fact, we’re bombarded by sexual imagery in media and advertising on a day-to-day basis. We don’t necessarily discuss that with other people, but most of us don’t deny it. On good days, we aren’t even embarrassed by it unless someone actually implies we’re having sex. (Even if we are.)

I am sex-positive. I respect and understand the choices of people prefer not to consider themselves that way. But I, personally, am sex-positive. Writing sex scenes does not automatically reflect sex-positivity, though, any more than admitting that sex is perfectly natural means my relatives are comfortable discussing it. One of the challenges I faced in writing The Superheroes Union: Dynama was writing from a sex-positive point of view while staying true to my heroines…neither of whom considers herself sex-positive.

In the end, I decided the most sex-positive thing I could do for the story was address sex as realistically as possible, despite some of the underlying wish-fulfillment that makes romance what it is. My heroines talked to each other about safer sex–maybe later than they should have! They didn’t use sex toys, not because they had any reason not to, but because Dynama’s twins found the one in her underwear drawer when they were four, with predictably bad results, and she decided to do without until they were old enough to understand privacy.

Both my heroines see their bodies as flawed, because body image in Western culture tends to be so artificial right now, very few women measure up to their own expectations. But they see each other as beautiful, each taking joy in the other’s body, even if neither is sure she takes joy in her own. Dynama’s superhero costume covers her from neck to ankles, and the only character who runs around with a superhero emblem on her boobs is the Invincible Woman, who deliberately put it there as a target.

In the end, I didn’t break any new ground for portrayals of sex in fiction in The Superheroes Union: Dynama, and my relatives still mostly don’t ask about that romance they knew I was writing. But I’ve refused to pretend there’s no sex in it; and I’ve managed to give both my heroines full ownership of their bodies, their sexual preferences, and their sex lives.

In a dreadful social moment in the US where everything from men’s hair product commercials to the Republican Party’s 2012 platform is trying to take women’s sexuality and place it firmly in the hands of men, that may just be the most sex-positive thing I could do.

How do you feel about sex in romance, and does that have any relationship to how you feel about sex in the rest of your life? And seriously, has any woman seen that Axe commercial with the dismembered boobs and disembodied hair and not wanted to throw something at her television? Visit my blog for the swag giveaway! Comment to win a Superheroes Union totebag or T-shirt.

What if your evil ex really was evil? TJ Gutierrez used to be a superhero. But after the birth of her twins seven years ago, she hung up the yellow spandex. Until the day her archenemy and ex-husband, Singularity, breaks out of prison. When it becomes clear he’s after the kids, she’s forced to call the nanny helpline-and once again become…Dynama! Annmarie Smith doesn’t have a superpower. She saves the world by keeping kids safe while their parents fight evil. She temporarily moves in with TJ, and the way the magnetic mama puts family first captures Annmarie’s respect, and maybe her heart-even though she knows better than to fall for a superhero. Still, it’s hard to resist their wicked chemistry. Kapow! But they can only hide from the world for so long. When Singularity’s quest for custody puts the kids’ lives in danger, can the two women conquer the evil villain and save TJ’s family-all before their first date? The Superheroes Union: Dynama is available from Carina Press. You can read an excerpt here. Carina Press store | Amazon.com | BarnesandNoble.com

Ruth Diaz writes genre romances about non-mainstream relationships. She hides a number of publications in a different genre under another name, but The Superheroes Union: Dynama is her first romance publication. For more information, you can subscribe to her blog, like her on Facebook, or follow @RuthDiazWrites on Twitter (where she is most active and, well, opinionated).